Paper Mario: The Origami King has a fun and twisty story that ends up with a fantastical resolution. Whether you want to know exactly what happened or you don't feel like watching a video to find out, we've got you covered with all the info.

Wondering what's going on with the ending of Paper Mario: The Origami King? It can be a bit hard to follow since there are a lot of events unfolding throughout the game, but we've got you. Here's what you should know about the end of the game, from the normal ending that anyone can unlock by completing the main story to the Secret Ending that you must get 100% throughout the game to see.

Gear up, grab a bowl of popcorn, and sit back for a look at the ending of Paper Mario: The Origami King, explained. Now you don't have to sit through a lengthy video or buy the game if you don't want to. But if you're still playing, obviously beware of spoilers. 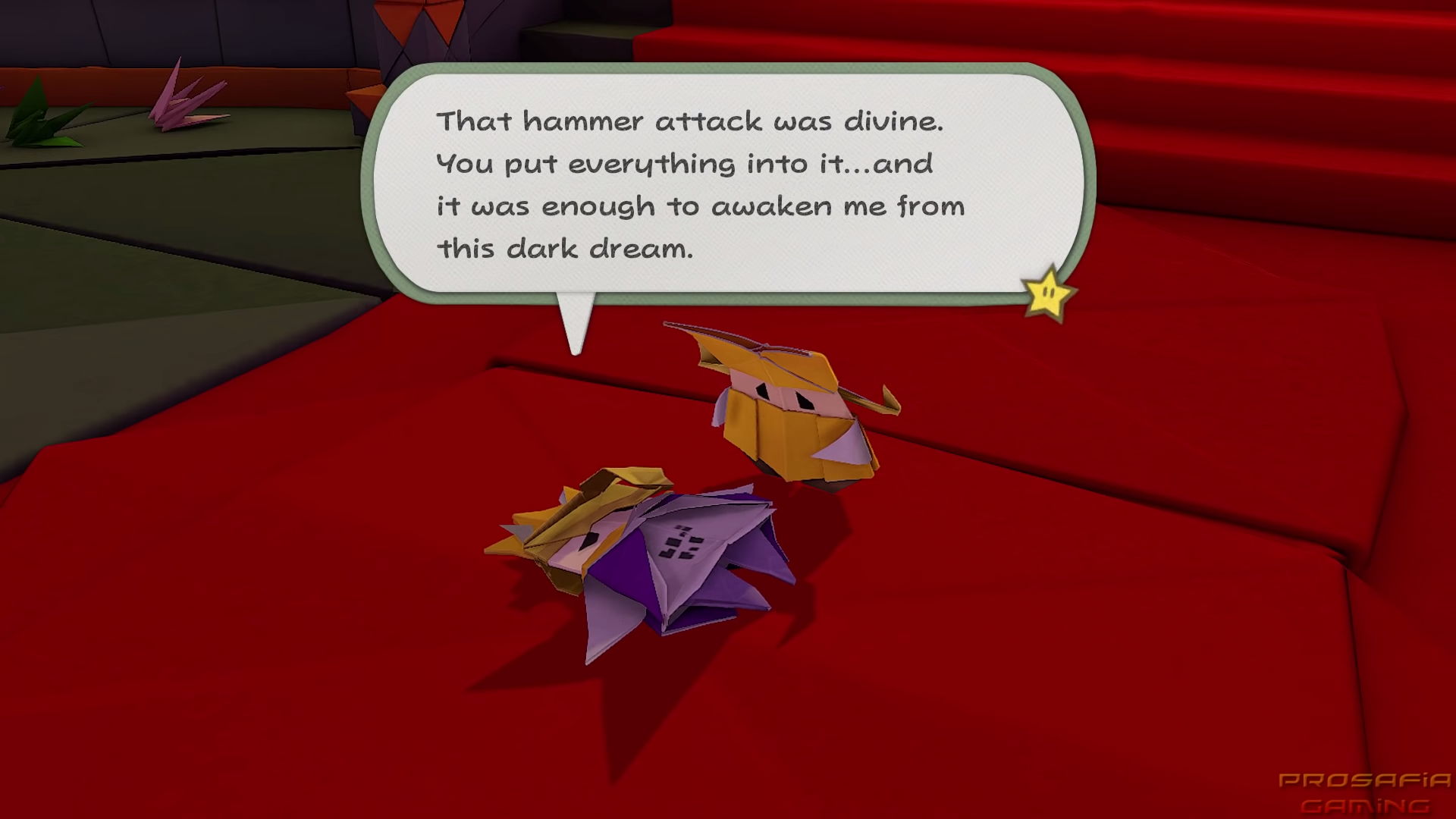 After the final boss King Olly is defeated following a grueling, lengthy battle, the Origami King lies defeated and crumpled as his sister Olivia tends to him. She ended up using a special hammer attack to fell him and awaken him from the "dark dream" that had him turning characters into Folded Soldiers, or the malevolent monsters of Paper Mario: The Origami King.

Olivia finds a scrawl that Toad, the Origami Craftsman, had written on Olly and reads it aloud. It says "Dearest Olly, may you grow into a fair and kind king." It was meant as a wish for Olly to be the best he could be as a new king. Olly reminisces on how angry and rage-filled he'd been throughout the game despite there being nothing but well-wishes from Toad written on his both. 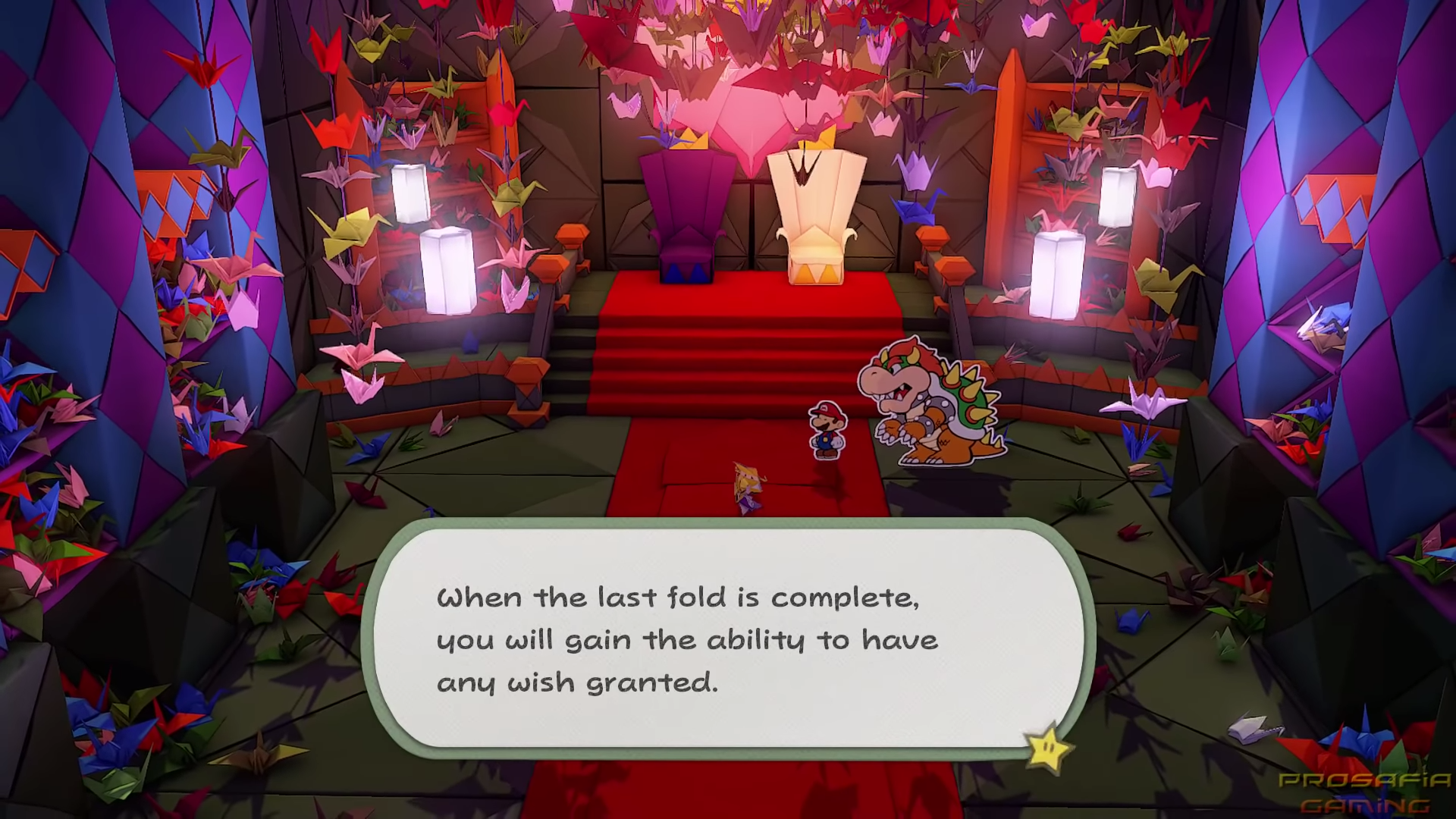 He then asks Olivia to take his body and fold it into the 1,000th crane to join the 999 cranes in his chamber. He advises that when the last fold is complete, Olivia and company will have the ability to have any wish granted. He then fades away, leaving his paper body behind.

Luigi rides in with the Origami Craftsman (Toad) who realizes the crane technique is about to take place, with Olivia asking for help on how to fold the crane. Toad tells Olivia what to do as they fold Olly into a paper crane. The technique is completed and Olivia makes her wish. She asks for all of the origami folded by her brother to be undone, which will save quite a few characters from their origami fates. 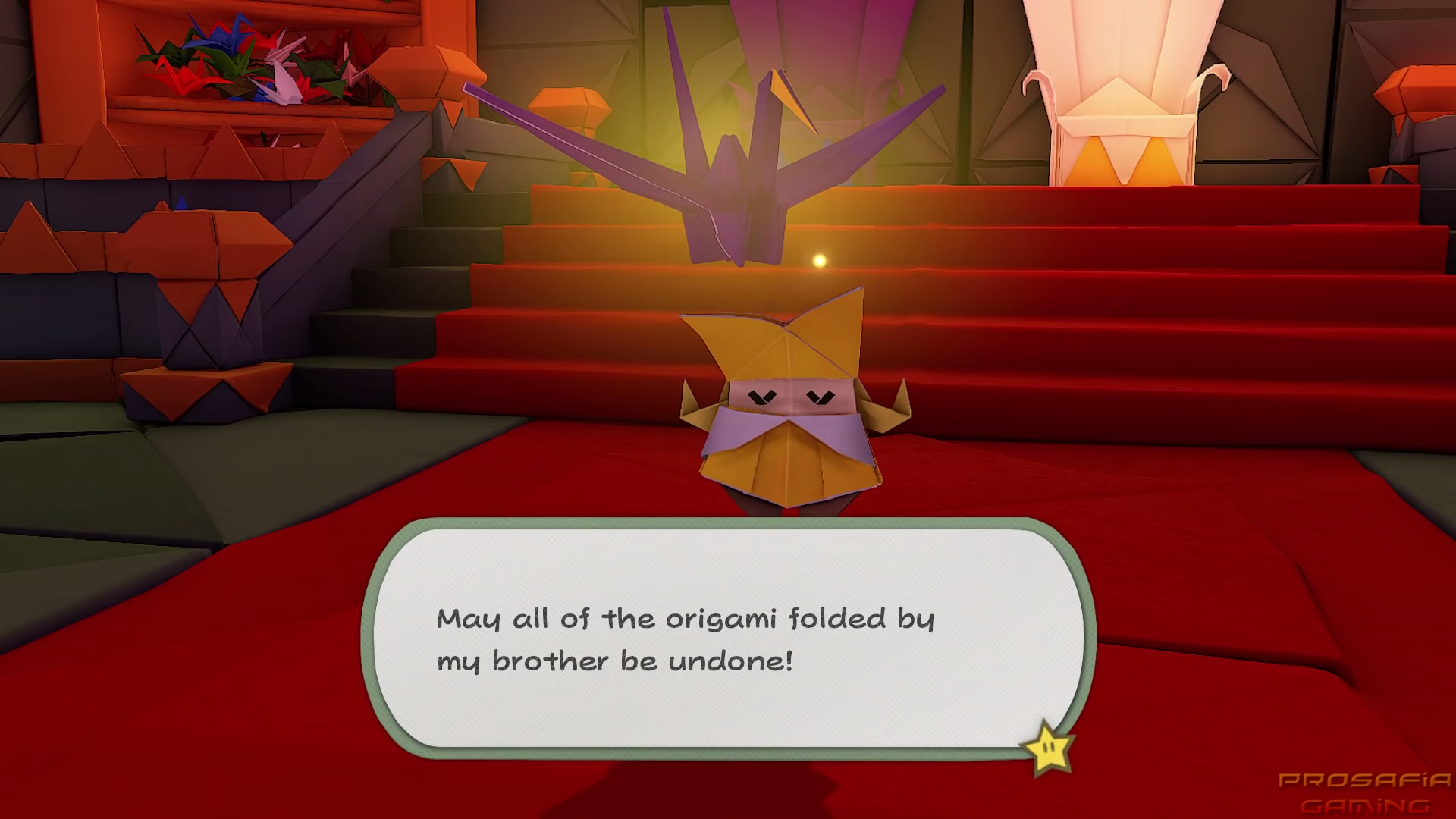 Olivia's wish is granted, and all of the evil perpetrated by her brother is summarily undone, which dismantles the very castle she finds herself in. All returns to normal after a blinding light and spectacle. This brings Peach's Castle back to the way it was as origami cranes fly around it upward to the sky.

With all of the evil undone, Mario, Luigi, Toad, Princess Peach, Bowser, and the rest of the characters stand in front of the castle and think about the ordeal they've just gone through, back to normal. Olivia is missing, however, because she happened to be one of the folded characters brought into the world by Olly. 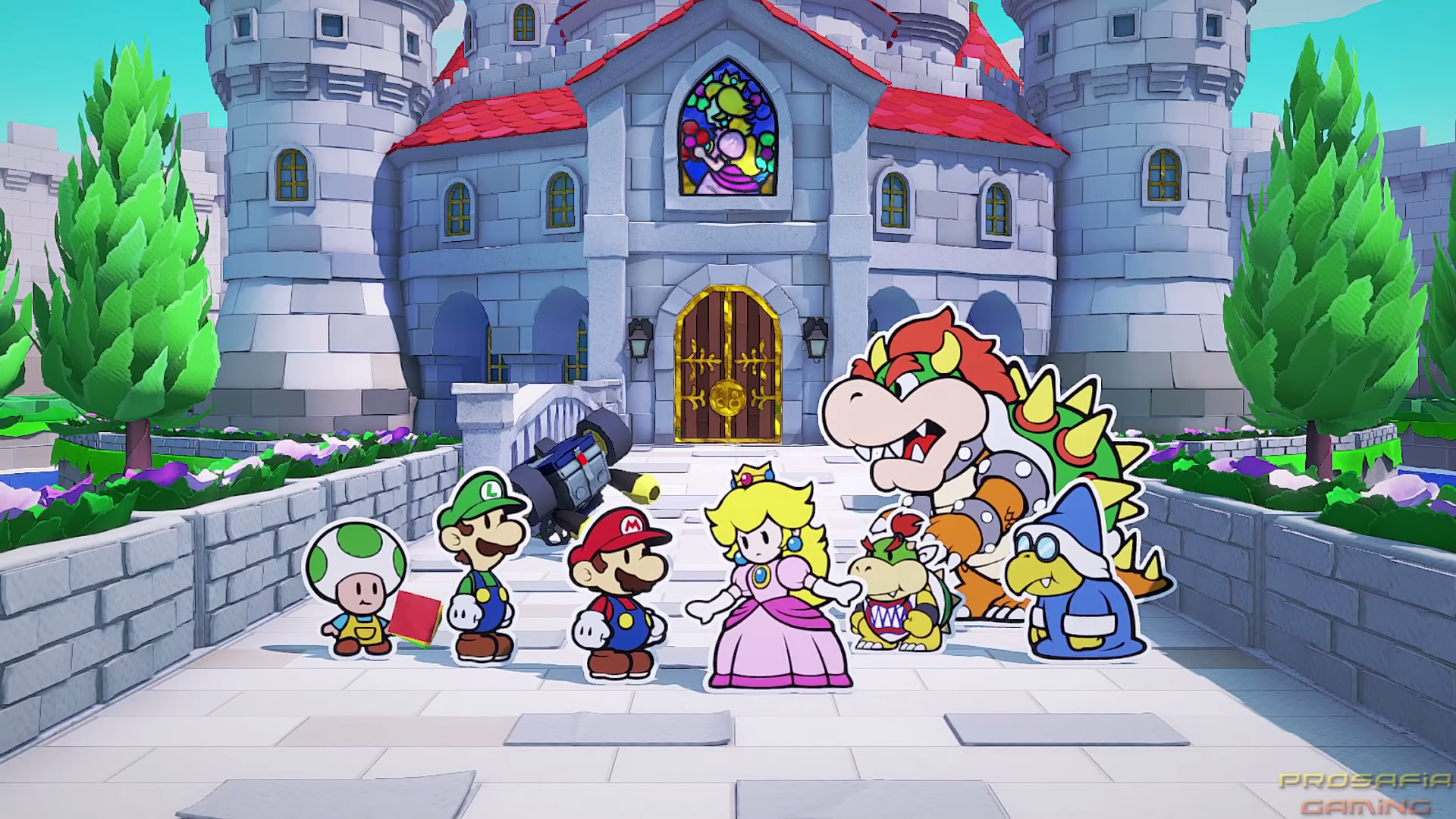 The group begins celebrating later that evening, as the castle is lit up with colorful decorations. Everyone in Toad Town takes place in an Origami Festival, with folded characters everywhere, and former bad guys living it up together, throwing confetti, and partying.

Toad shows off a paper replica of the origami castle Olly and Olivia created, and they think about Olivia, thanking her for her bravery and wishing she could be with them before launching tons of folded origami lanterns into the night sky. The screen fades to black, and the story is over. 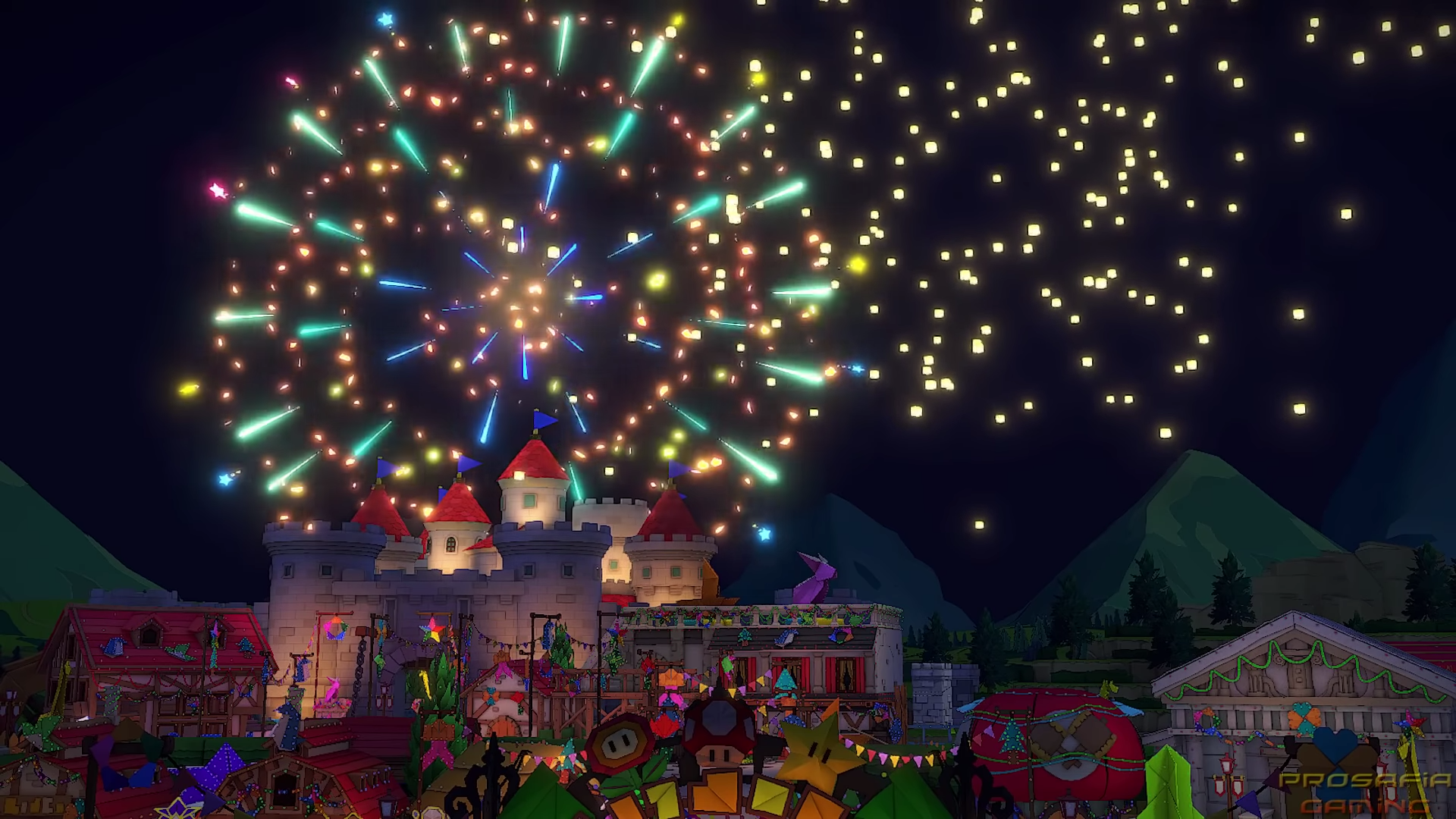 It's a happy ending for everyone – though Olivia did sacrifice herself. Everyone is grateful for what she did to bring things back to normal. 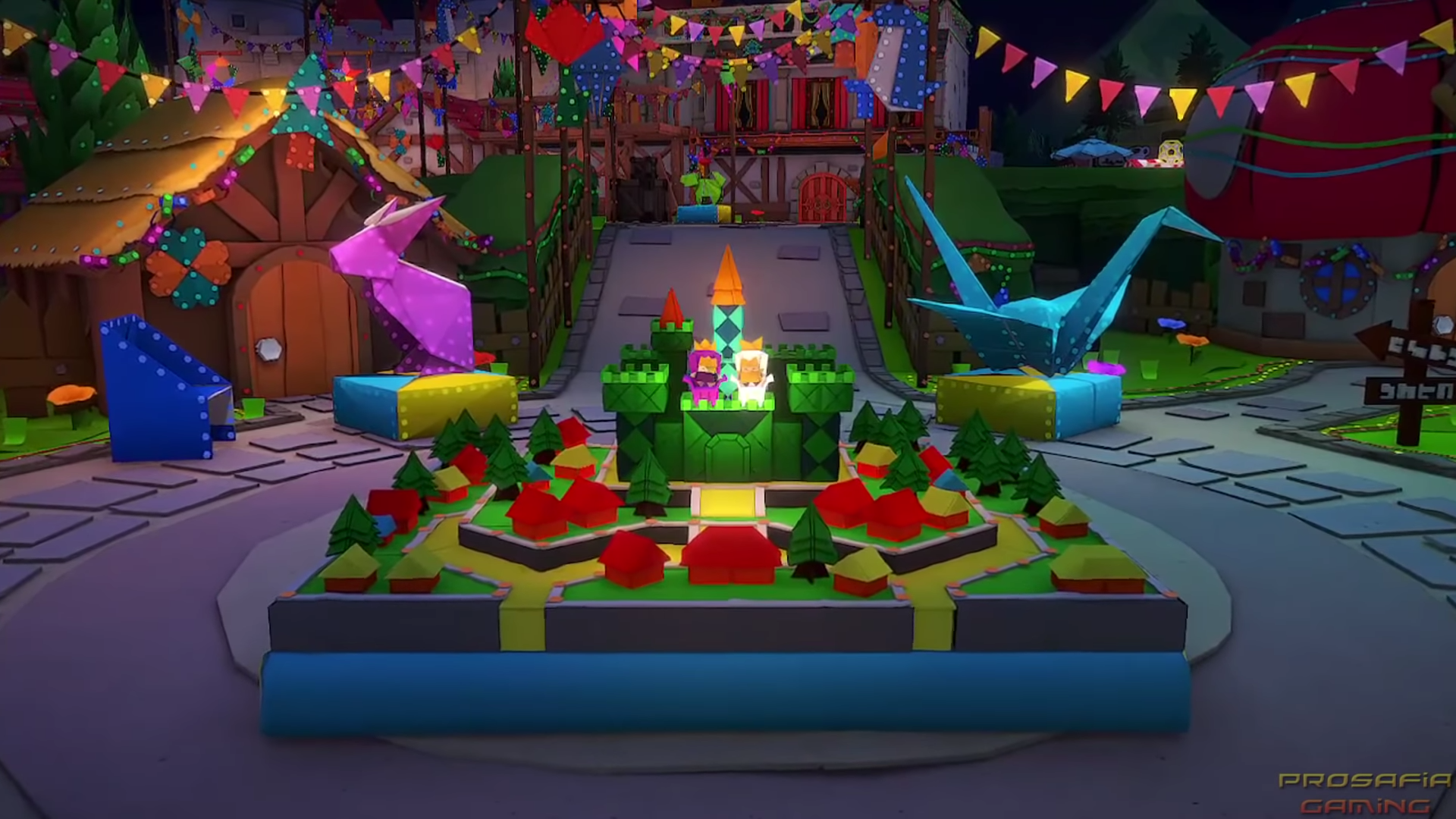 Now, there's also a secret ending you can unlock if you manage to get 100% completion. This includes collecting all hidden Toads throughout the game, scoring the highest number of points possible in the Shuriken Mini Game, and hitting every single "?" box scattered throughout each area. Finally, you need to collect all of the Treasures (there are 120), so make sure you do all of these things, and you'll be given the secret ending.

The Secret Ending differs from the original ending in that it still follows the characters having a festival in Toad Town and entering the colorful city, where Bowser and the rest of his bad guy buddies are partying now that the Origami King has been felled. However, after this scene ends, things diverge a bit. Following the credits, a Toad will appear and dash away from the screen, revealing two figures sitting atop paper thrones. A message will flash saying "Whoa, that's 100%!" And the menu screen will start back up. Now Olly and Olivia can sit atop their thrones together forever.

Now, you can go back through the game and enjoy it with a bit more context, or move on to the next one.

Want to chat about the ending with others who have finished the game? Join our SteelSeries Discord for some awesome discussion!